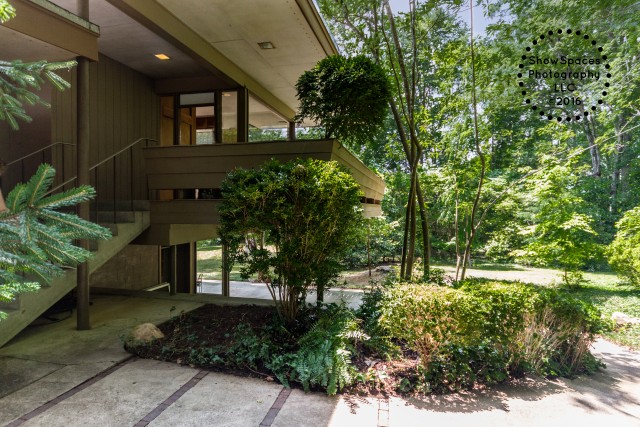 My Twitter feed blew up a few weeks ago with the news that North Carolina Modernist Houses, a non profit oganization that advocates for the preservation of Modernist-style architecture, was sponsoring a public tour event on June 4.  The article in the Triangle Business Journal was referenced in most tweets.  I follow many Real Estate related feeds, so naturally, it was mentioned many times.

Well, as a new North Carolina resident and Real Estate Photographer, how could I pass up this chance?  It even said I could “Take all the photos you want!”.

Yes, the house was the childhood home of James Taylor. He grew up there from 3 years old through High school along with his three brothers and one sister.  His father was on the faculty at UNC-Chapel Hill’s School of Medicine.  In 1974, the home was sold to the Johnston family, whose heirs are putting the property up for auction this month.

But even more interesting is that I have only recently become aware of all the modernist homes in the Chapel Hill area and throughout North Carolina as I most recently had the pleasure of photographing one in a neighborhood of many.  The Taylor’s house dating to 1952 was designed by George Matsumoto and John Latimer.  In the 1960’s the kitchen was renovated by Arthur Cogswell.

It seems this house has both cultural and architectural significance… I signed right up.

The visit had a great vibe.  The spaces were staged perfectly.  In addition, a local musician hung out gently playing and singing some James Taylor tunes in the guest house where the boys lived during their teen years.  It was a beautiful day that allowed the sunshine and nature to harmonize with the home’s spaces.  Below are the photos that I managed to take during the open house.  The people ebbed and flowed through the space and for the most part, I was able to get photos without anyone in them.  In a few cases, I edited them out. While I had my flashes with me, I decided it would distract from the experience for me and others.  I decided to take it all in and see what came.  All photos are taken without a tripod.  Some required long exposures while the camera was handheld, so please excuse any blurriness.

There are three galleries below. Captions will appear if you hover over them. If you click on a photo, it should bring you to a gallery to scroll through them.